Casting is now complete for the National Tour of Legally Blonde!

The casting is now complete for the national tour of Legally Blonde which launches January 19, 2019. The Lutcher Theater in Texas will be the first to open their doors to the bend and snap, before the musical heads to over 40 cities.

The cast, directed by Jeff Moss, will be led by Maris McCulley as the fabulous Elle Woods. She will star alongside Woody Minshew as Emmett, Berlande Millus as Vivienne, James Oblak as Warner, Christopher Carsten as Professor Callahan and Jill Taylor Anthony as Paulette.

WHAT IS LEGALLY BLONDE ABOUT?

Based on Amanda Brown's best selling novel and subsequent smash hit film starring Oscar Winner Reese Witherspoon, Legally Blonde The Musical follows the transformation of sorority president Elle Woods. Determined to show she is more than just pink and sparkles, Woods set out on a mission to win the love of her life back whilst tackling the air-head stereotype which has been branded onto her.

Overflowing with dance numbers and catchy songs, this fabulous fun tale explodes on the stage with well-known scenes and iconic characters, including Bruiser the Chihuahua and the Delta Nu Bond. This show is perfect for brightening anybody's day, and that's not just because it's packed with a fresh design and LED technology, but because Elle Woods' infectiously bubbly personality is an endorphin for everyone! 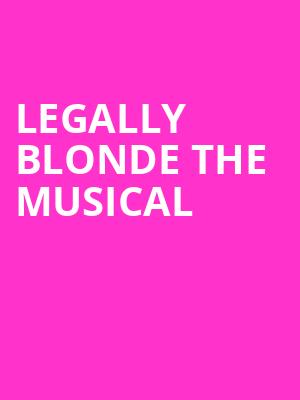 The nonstop sugar rush of a show!